The price of the Ryzen Threadripper 1900X is going to be $549 and it will be available to purchase on August 31st at your favorite retailer. This price point puts it about $50 below the Intel Core i7-7820X 8-Core processor. This is a rather interesting processor due to the price point and the robust features found on the AMD X399 Platform.

When frequency was all that mattered for CPUs, the main problem became efficiency, thermal performance, and yields: the higher the frequency was pushed, the more voltage needed, the further outside the peak efficiency window the CPU was, and the more power it consumed per unit work. For the CPU that was to sit at the top of the product stack as the performance halo part, it didn’t particularly matter – until the chip hit 90C+ on a regular basis.

Now with the Core Wars, the challenges are different. When there was only one core, making data available to that core through caches and DRAM was a relatively easy task. With 6, 8, 10, 12 and 16 cores, a major bottleneck suddenly becomes the ability to make sure each core has enough data to work continuously, rather than waiting at idle for data to get through. This is not an easy task: each processor now needs a fast way of communicating to each other core, and to the main memory. This is known within the industry as feeding the beast. 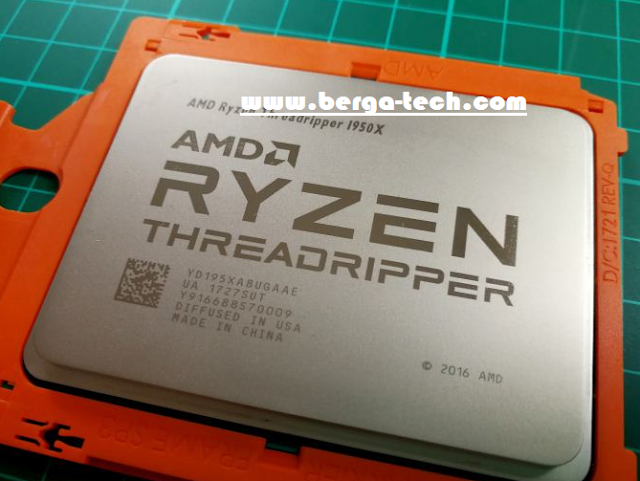 After playing the underdog for so long, AMD has been pushing the specifications of its new processors as one of the big selling points (among others). Whereas Ryzen 7 only had 16 PCIe lanes, competing in part against CPUs from Intel that had 28/44 PCIe lanes, Threadripper will have access to 60 lanes for PCIe add-in cards. In some places this might be referred to as 64 lanes, however four of those lanes are reserved for the X399 chipset. At $799 and $999, this competes against the 44 PCIe lanes on Intel’s Core i9-7900X at $999.

Out of the gate today is AMD’s Ryzen Threadripper family, or Threadripper for short. These CPUs take a similar design as the AMD EPYC processors, but for a consumer platform. The first two CPUs are the 1950X and 1920X, with 16 and 12 cores respectively, to be then followed by the 8 core 1900X on August 31st, and the 1920 at sometime unknown. These parts will fit into the LGA-style TR4 socket, containing 4094-pins. This socket is identical (but not interchangeable) to the SP3 socket used for EPYC, and a large step over the 1331-pin PGA-style AM4 socket for the Ryzen 7/5/3 processors. 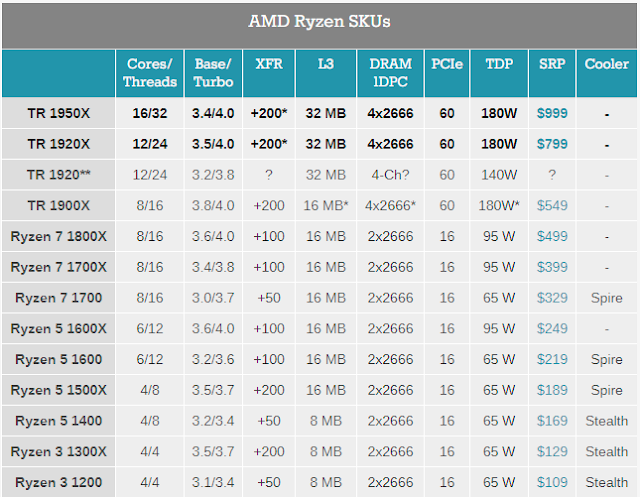 Where Ryzen 7 is aiming for high-end desktop market share (HEDT) Intel, Threadripper is designed to run above and beyond this, into the 'super high-end desktop' (SHED) market. Core calculates that AMD released with Threadripper is only seen traditionally on the Intel server line, which features up to 28 cores for $ 10,000 expenditure. By bringing in a higher core count piece, with IPC numbers, frequency, and reasonable power, AMD fudging between consumers, prosumer, and enterprise. To compete, Intel announced that their Skylake-X platform will be launched with 12, 14, 16 and 18 core parts in the next few months.

Similar to the largest Intel chips, AMD shoots Threadripper into the hands of users who want to always do everything. For home users, it can mean streaming games (transcoding and uploading in real-time) as well as hosting game servers and everything else besides. For prosumers that means video production or counting throughput using multiple GPU / FPGA mixed with fast storage and networking. The idea is that if users have something to do, they can also use their system to do other things simultaneously and have sufficient CPU grunt, PCIe slot, storage, and DRAM to turn everything on. Threadripper is, after all, manipulated from a design to a server CPU, and therefore has never strayed too far from the aspect of the high performance density that has defined the server over the past decade.

Again, similar to the Intel HEDT platform, AMD launched the X399 platform in addition to Threadripper to provide the necessary tools. The large TR4 socket and all its pins provide quad-channel memory with two DIMMs per channel, along with up to 60 PCIe lines for additional cards (video cards, NICs, SSDs, etc.). This motherboard currently supports two Threadripper motherboards launched today, another CPU will be launched at the end of the month, and another leaked but unreported CPU (with an unknown release date). 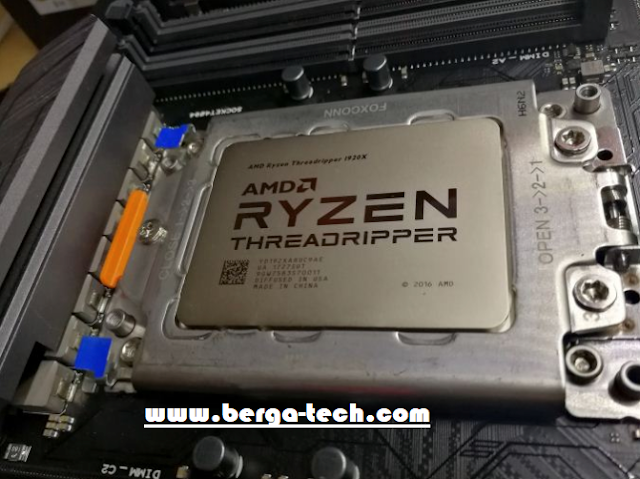 The socket is different from the previous AMD socket, which shows how many steps to top it. Instead of a PGA socket with a simple latch system to provide enough power between the pads and pins, the LGA TR4 socket has three Torx screws that must be removed sequentially - one to the left of the image above and two on the right. The socket bracket immediately flips open, with a small tray - this tray takes the CPU. All CPU Threadripper will fit into this small tray, and no need to remove it from the tray. 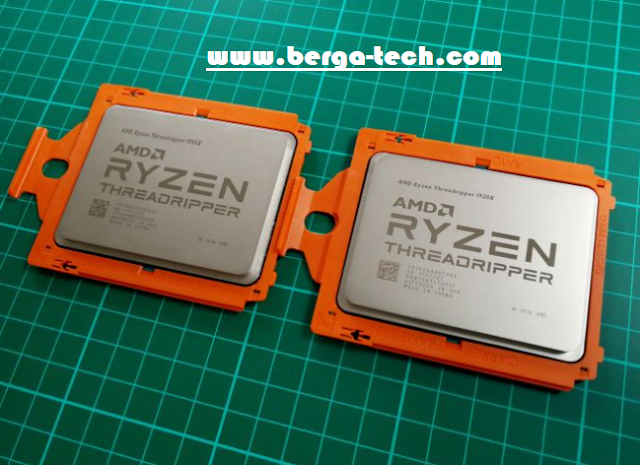 Due to socket design and CPU size, the screw hole for CPU cooler is also different. Since each CPU is currently directed to 180W, AMD recommends minimal cooling of the liquid, and will incorporate an Asetek CPU screw with every CPU sold (a Torx screwdriver is also included). 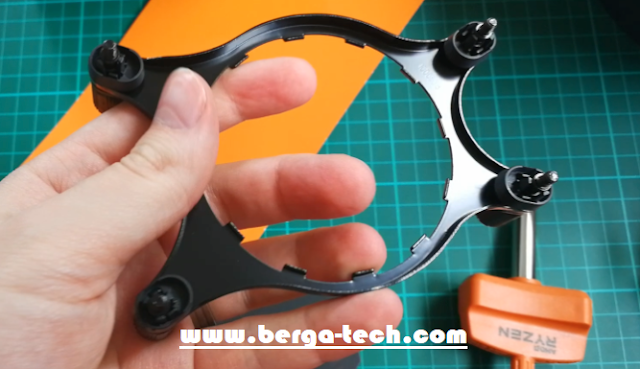 A total of six motherboards from the four main manufacturers should be available on day one, with at least one or two more coming down the pipe. Our own Joe Shields has written an extensive preview of each motherboard to accompany this article.

At present we expect the X399 motherboards to vary between $249 and $599, depending on their feature set. The motherboard we were sampled for the launch review was ASUS’ X399 ROG Zenith Extreme, which has an MSRP of $549.

We asked both Intel and AMD to list what they consider would be the ideal competition for the Threadripper processors. Given that Threadripper is a consumer focused product – and interestingly, not really a workstation focused product – AMD expectantly stated that Intel’s current Core i9-7900X, a 10-core processor, is the product available today that best fits that role. A Xeon would be an workstation/enterprise product, which would not be sold in many prebuilt systems that Threadripper customers might want.

Intel surprised me, in saying exactly the same thing. They stated that the Core i9-7900X would be the best fit at the time of Threadripper’s launch. I half-expected them to suggest some form of cheaper 2P option, although when I followed them up as to why they didn’t suggest such a thing, it became obvious for two reasons: firstly, Intel’s Consumer and Intel’s Enterprise divisions are almost different companies with little crossover or insight into the other’s business. There are no unified press relations on this front: ask the consumer team, get the consumer answer. Ask the Enterprise team and they’re more focused on EPYC, not Threadripper. The second reason is that a ‘cheap 2P’ system doesn’t exist when you buy new – most online discussions about cheaper Intel 2P systems revolve around finding CPU bargains from the gray market or resellers.

So the competition is essentially Skylake-X (and a nod to Broadwell-E at a discount). The AMD Threadripper 1950X with 16-cores and 1920X with 12-cores are put up against the Core i9-7900X with 10-cores and the Core i7-7820X with 8 cores. Broadwell’s Core i7-6950X also makes an appearance due to the different microarchitecture. We’ll add in AMD’s Ryzen 7 1800X as a contender as well, and Ryzen 7 1700 as a performance per dollar competitor. 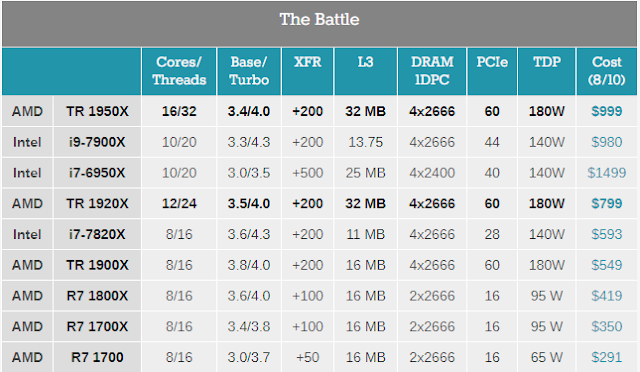 Due to circumstances beyond our control, this review does not have Skylake-X game data. At the time of our SKL-X review we were having some problems and we wanted to test in the future. We run some more data using the latest BIOS and stricter cooling settings, when Threadripper arrives, we extinguish SKL-X and Threadripper take the SKL-X phyical place in the lab. After reviewing our SKL-X results and now working on it, we have a single CPU + GPU combo that seems to look as expected but the rest is still wrong. After this difficult review and some mini projects, we will update the X299 motherboard with a new one and give up to find this problem, as it seems to be BIOS / related firmware.
Shares
NEXT ARTICLE Next Post
PREVIOUS ARTICLE Previous Post
NEXT ARTICLE Next Post
PREVIOUS ARTICLE Previous Post