The popularity of BIOSTAR with the quantity performance ranges from crypto mining and RACING gaming motherboards to Intel and AMD platforms has made people pay attention; Now the BIOSTAR RACING board is gaining popularity from modding circles.

Featured here is a project of some of Thailand's top models, 'BR7 [THE WINNER]' themed around BIOSTAR RACING X370GT7 and BIO RACING that accompany BIOSTAR RACING Z270GT9; Both mods make good use of VIVID LED DJ, VIVID LED Armor and 5050 LED Fun Zone for RGB lighting effects. For a more sci-fi display, BIOSTAR RACING X370GTN joins the superhero of Marvel Comic in 'I'm Groot' from one of the top modding teams in Germany.

Thailand offers one of the most active modding communities, making this project from the winner of 'The Modder Season 2', Nirut Wanta, a mandatory 5-session video series, documented by CompleteTV. 'BR7 [THE WINNER]' is entirely based on the design of the X370GT7 RACING BIOSTAR and is built of metal including a tiled plaid flag that holds the BIOSTAR RACING X370GT7 in the heart of the mod. VIVID LED DJs help control and synchronize lighting, while the Fun Zone LED 5050 enables the RGB Thermaltake fan, DIY liquid cooling pump and RGB T-FORCE Team Group memory to be controlled by two 5050 headers directly.

'I am Groot' with BIOSTAR RACING X370GTN, Germany


Another promising project that can take the crown at DCMM this year at Gamescom 2017. This mod displays the form factor of mini-ITX BIOSTAR RACING X370GTN and premium style is complementary mod 'I'm Groot' from the legendary German team in BT. -Custompc.de. They have chosen a theme based on the popular comic superhero Marvel Comics Groot, which leverages the current 3D printing trend. The intricate details that are made to make the character come alive make the use of brushed brushes, along with power tools and tools is a great example of new and old techniques. 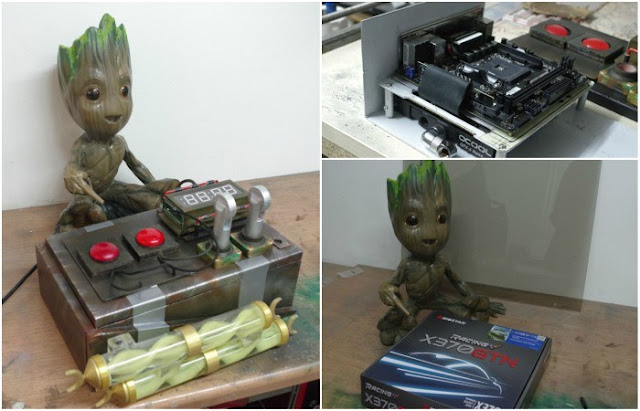 Chaipoj Khaowasut, the winner of 'The Modder Season 1' wasted no time to show off, what surprises some racing mods around, with BIOSTAR RACING Z270GT9 along with Thermaltake DIY liquid cooling and open chassis. The VIVID DJ LEDs make easy board and component illumination and VIVID LED Armor, which helps protect the I / O interface and audio electronic components, giving it a mind-set that there will be no limit to what it can do. do for his masterpiece.