Earlier this year we reviewed the previous version of Razer Blade Stealth and liked it. It features great design, highly portable form factor, and decent internal hardware. But despite succeeding in many ways, we were put off by large bezels of laptops. No doubt many potential buyers agree and instead opt for devices that offer more real estate screens on the same footprint.

Razer acknowledged this criticism rather than waiting for a new generation of Intel processors to refresh variant debuts, the company has released an updated Stealth Blade just months later.
You will not see a big improvement here, but there are small changes to push this laptop closer to perfection. So what is this change? 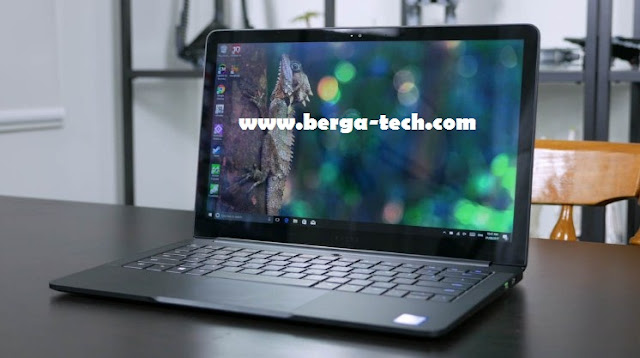 The first clear fixes address the main problem: the size of the bezel. The new Stealth Blade is now available with a 13.3-inch screen instead of 12.5 inches in the same chassis. This means more sleek bezels and more screen real estate - better 13 percent - without sacrificing anything from a design perspective. The entry-level model resolution is also higher, moving from 2560 x 1440 (234 PPI) to 3200 x 1800 (276 PPI).

For now, the new Stealth Razer Blade with QHD + 13.3-inch screen will be sold alongside the top-end 4K 12.5-inch variant of the previous generation, at least when there is still available inventory. However, it looks like Razer is removing this older bigger bezel model, despite having a higher resolution screen, which supports a 13.3-inch screen option. And phasing out this previous model makes sense, because I can not think of a reason why you want a slightly higher resolution when smaller screens and larger bezels. 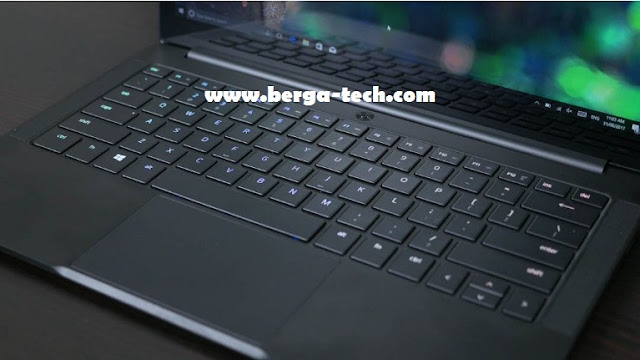 The other notable change comes to the configuration options available. Razer has culled all models with less than 16GB of RAM, a Core i7 CPU and a 256GB SSD. The $900 model with a Core i5 CPU, 8GB of RAM, 128GB SSD, and a non-touch display is therefore no longer available. 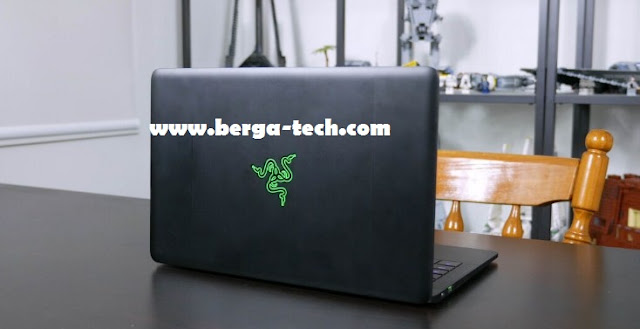 So let's go back and talk a bit further about the new look of Stealth Blade: 13.3-inch IGZO LCD with a resolution of 3200 x 1800. Smaller bezels make a significant difference to the aesthetics of the laptop. You do not get frameless frames on Dell XPS, but I think the Razer ratio to the bezel used here is now perfectly acceptable. 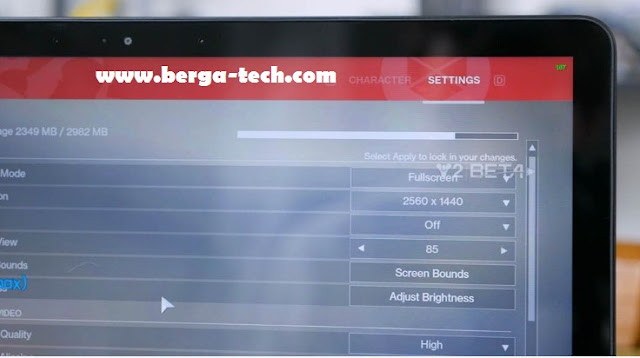 However I would say that the brightness is very good, reaching a peak of more than 400 nits when displaying all white colors. Contrast, as best specified in static conditions, is about the same as the previous Stealth Blade contrast of 1100: 1. The color temperature is also good, averaging around 6700K, though gamma is significantly affected by dynamic changes and grayscale dE2000 performance changes dynamically as well . 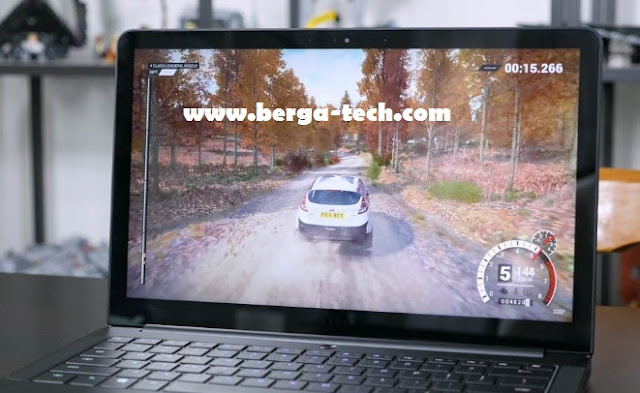 As for the colors, IGZO panels, glossy finishing and low gap between the glass and the screen leads to a fantastic viewing angle and color pop. For casual use, the dynamic contrast feature does not reduce the appearance of the screen in general. The color results appear to fall in the average range of dE2000 3.0 to 5.0, which is not suitable for accurate color jobs although dynamic contrast features can be disabled. The screen also includes a 97.6% sRGB spectrum.

Compared to the previous Stealth Blade with 1440p screen, the model's refreshed color performance is roughly the same, so there is no decrease in the size or resolution of the rising screen. In fact, the brightness is better than this new look, which helps when using the laptop outdoors.
Oh, and the screen is a touch screen too, which I think I use often on laptops, although a nice feature to add on touch input is better than the mouse and keyboard.

Razer has simplified configuration options with the new Blade Stealth, so it’s easier to get a read on the performance provided by this laptop. As it stands today, there's a sole hardware configuration available: a Core i7-7500U processor with 16GB of RAM and a QHD+ touchscreen display. Storage is the only component that can be modified, with 256GB, 512GB and 1TB options available.

The Core i7-7500U is not new, and it’s the same Kaby Lake dual-core found in the previous Blade Stealth I reviewed back in February. So we’re still seeing two cores, four threads clocked at 2.7 GHz with a boost frequency up to 3.5 GHz.

The Blade Stealth has integrated graphics only, namely Intel’s HD 620 clocked up to 1050 MHz. Some people seem to get surprised when I mention this Razer product doesn’t include dedicated graphics, considering Razer’s roots in PC gaming, but the Blade Stealth isn’t designed for gaming: it’s an ultraportable, just like other slim 13-inch machines. 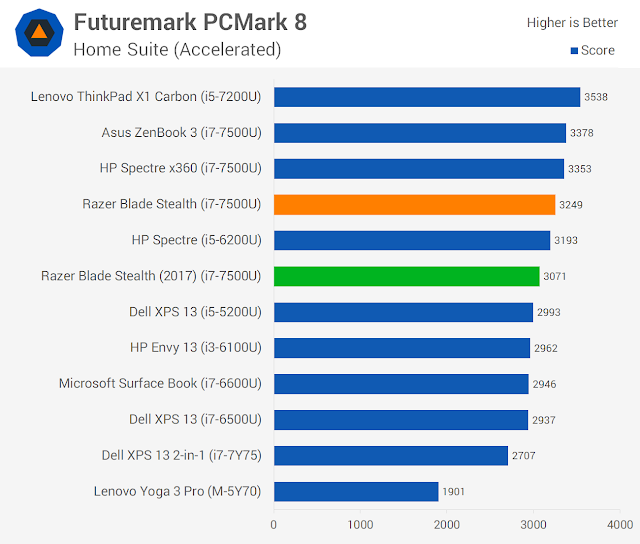 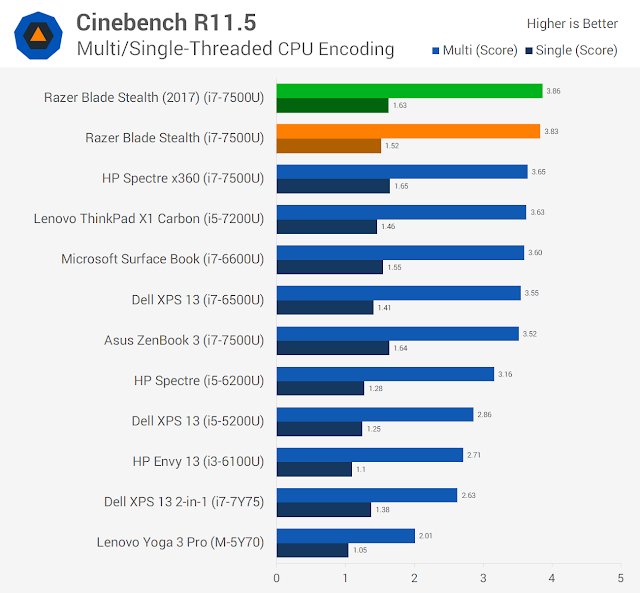 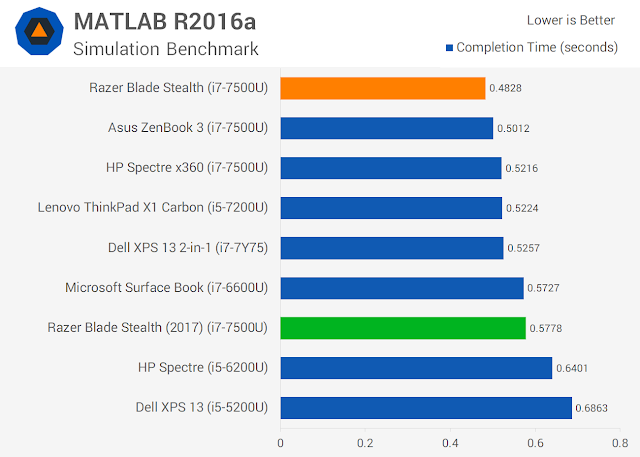 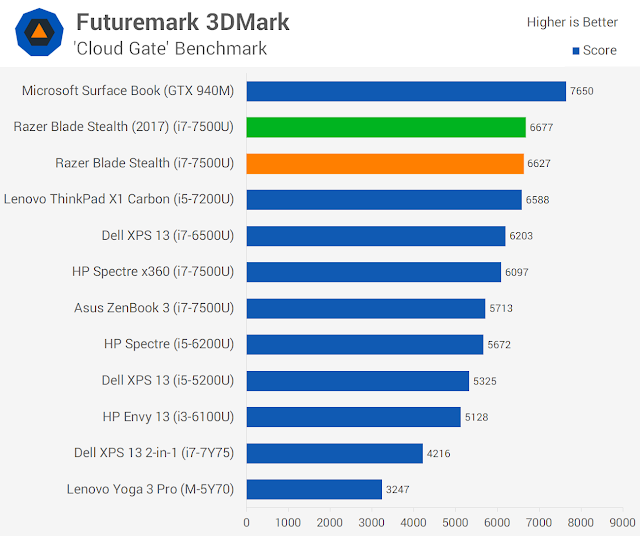 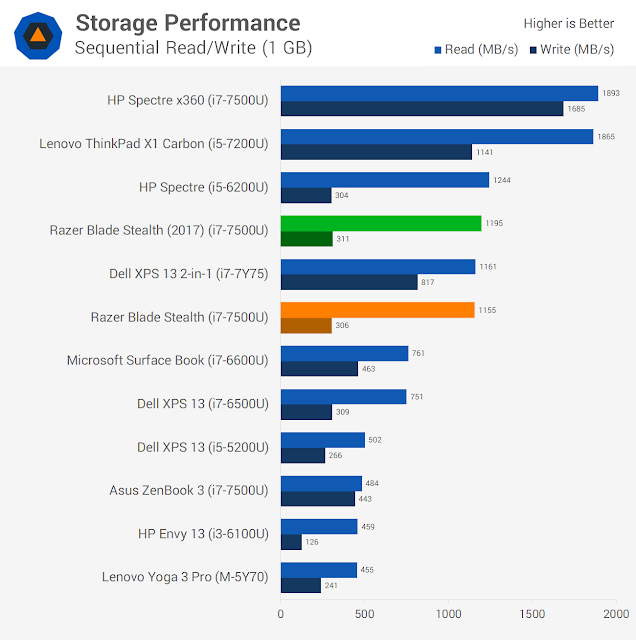 I will not spend much time discussing the new Blade Stealth performance, because it's basically the same as its predecessor. In some tests, the older Stealth Stealth is faster, in another new test faster, but on average it's all the same.

I like Razer who has released the Core i5 model with 8GB of RAM and 128GB of storage, but chose a variant that includes better components. 128GB storage is too tight for modern machines, so I always recommend people buy more expensive models. 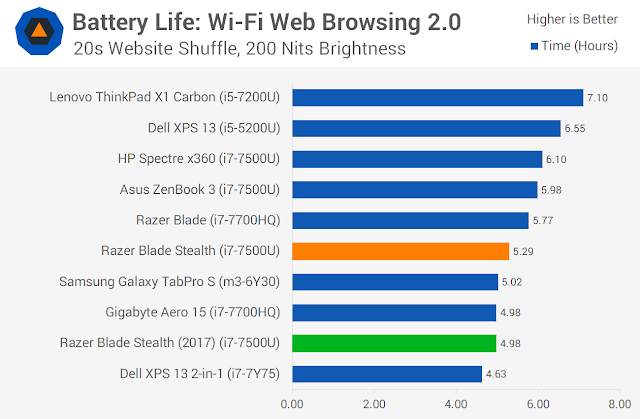 One of the more interesting areas of Stealth Blade to judge is the battery life. This model comes with the same battery capacity as its predecessor - 53.6 Wh - but with a larger screen at higher resolution. Razer claims that the Stealth Blade is still good for up to 9 hours of battery life, just like the previous 1440p model.

But in practice, the battery life is slightly reduced from the previous model. I do not think battery life is fantastic, but in general use I also do not consider it horrible.