Talking about Motorola Moto G3, this smartphone has been marked as the most successful Moto G series smartphone after its first generation which is Moto G. Success Moto G3 partly due to its specification and partly due to its design. One of the specifications that specifically highlighted the factors in the popularity of the Moto G3 was the IP67 that was waterproofed which would avoid the smartphone from water damage to some extent. This is huge because there is a lack of waterproofing in some of the flagship smartphones that have been launched this year and Motorola put it into the smartphone budget, Moto G3.

The smartphone also has a eye catching design with plastic shells that can change which looks attractive from the distance along with metallic rims along the edges. In addition, there is a dimple in the middle of the back with an iconic Moto logo scratched over it. Now, Motorola Moto G3 is launched with Android 5.1 Lollipop which is the latest version of Android at that time and later, the smartphone gets an official update to Android 6.0.1 Marshmallow which is the company's first official update for smartphones. 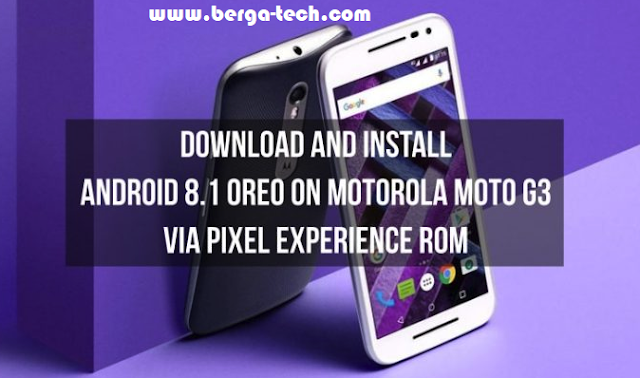 Motorola releases Nougat's Android 7.0 update to this device and we know that this will be the last update to come to Moto G3 formally from the company because we have not received plans or confirmations from Motorola about the company's intention to upgrade this smartphone to Android 7.1 Nougat or Android 8.0 Oreo. However, we have mentioned that this smartphone is very popular among Moto G series fans and this includes many developers from the well-known Custom ROM as well.

Now, there are a number of Custom ROMs that have been developed for most of the Moto G series smartphones but most software developers are Moto G and Moto G3 and we have mentioned about the Moto G3 that got Android 7.1 Nougat and also the latest update for Android ie Android 8.0 Oreo on their smartphones are not even available for some top-class smartphones.

However, Android 8.1 Oreo is now available for the Motorola Moto G3 and is available thanks to the Pixel Experience ROM. The custom ROM has been available for this device for a long time and has now been ported to support Android 8.1 Oreo which is also named Android 8.0.0_r33 as it has not been officially launched by Google. The announcement of availability of a custom ROM for Moto G3 was created by XDA Senior Member, popularly known as rahul9999 in the XDA forum.

If we look at this Custom ROM for Moto G3, it's mostly stable with most of the important things that are known to work and this also comes with all pre-installed Google Apps. We have compiled a list of things that are being worked out and which need to be fixed as noted by the developer.


You should have unlocked bootloader and TWRP recovery installed on your Moto G3. If you have not done it yet, you can follow this tutorial to Unlock bootloader and Install TWRP on Moto devices.
Your device should have at least 50% battery remaining to proceed with the installation.
It is recommended to take a backup of your phone if you have important data on the device.


After completing all the steps in the guide mentioned above, you will be able to experience the latest Android 8.1 Oreo ROM on your device in the form of the Pixel Experience ROM. Note that this ROM is in beta stage and many bugs are expected to have been listed above so continue to install this ROM on your daily driver carefully.

If you have any problems understanding the steps mentioned above.