ASRock's X99 Taichi hit the sweet spot for us. This is a cheap board that offers solid performance, good features, and no major flaws. But that's not the perfect board. The CPU overclocking headroom is slightly behind the competition, but the bigger problem is bandwidth and performance. The issue is not enough to prevent mainstream consumers, but enthusiasts who want better performance than average will look elsewhere.

ASRock anticipates it and releases a close twin to address the problem. You will never know it by product name. The Fatal1ty X99 Professional Gaming i7 is a mouthful, but still uses Taichi's approach to keep it simple. 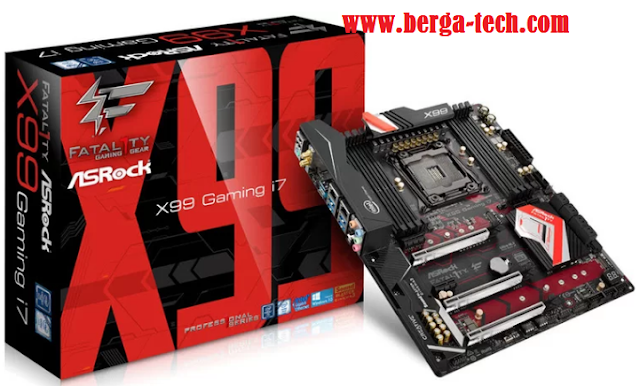 The Gaming i7 adopts the usual black, gray, and red scheme of the Fatal1ty series. But under color, it is exactly the same 8 pcs PCB with the same printing as Taichi. You can even see placeholder and socket prints in Taichi for some of the additional components that Gaming i7 has. It also means the CPU cooling holes do not run all the way through the boards, interfering with some cooler compatibility. (We will continue to refer to the Taichi feature to be paired with Gaming i7.) 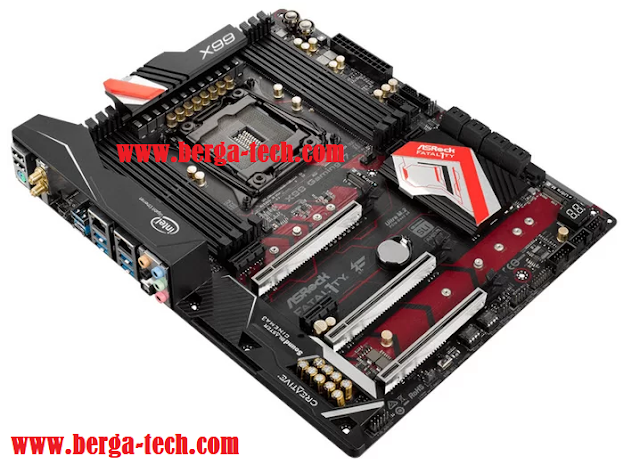 Gaming i7 uses the same 12 phase power regulator as Taichi. Chokes are rated at 60 amps, given an 8-pin power input, and a large enough heatsink is mounted on top of the MOSFET. Every RAM bank also gets double phase VRM. 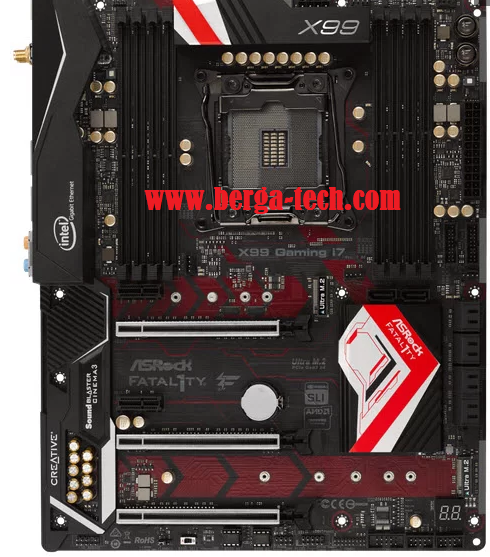 Fan control is fortunately unchanged from Taichi, which means very good, with full PWM control in all headers. The optional CPU header maintains an alternative pump control mode. Unfortunately, the layout is the same, meaning there are no headers along the bottom edge of the board for the fan below or below the front intake. Two main CPU fan headers are in the top corner with three other places in the center, above the PCIe slot.

The Gaming i7 retains the Taichi storage configuration. Eight of the 10 SATA chipset ports remain along the front edge with the other two just above the chipset heatsink. Two SATA ports also serve as SATA Express connectors. Both M.2 slots still have their own PCIe path, meaning no sharing with expansion cards. The lower part of M.2 can operate in 3.0x4 mode regardless of configuration, while the top of M.2 will only work in PCIe with 40 lane CPU. No onboard U.2 port is offered, but ASRock does have an M.2-to-U.2 adapter card (purchased separately).

Cable and expansion card functions are also identical to Taichi. The top two full-length slots are connected to full x16 bandwidth, while the bottom is just the x8 cable. A 40-channel CPU will split the paths in x16 / x16 / x0 and x16 / x8 / x8 configurations. With a 28-channel CPU, the second slot goes down to x8 only, and the bottom slot will be borrowed from the primary slot, resulting in a split x16 / x8 / x0 and x8 / x8 / x8. Two 2.0 x1 slots that run out of chipsets are still in the first and fourth positions. 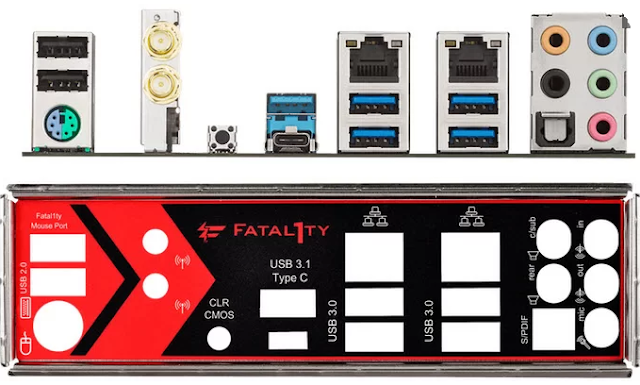 USB and Peripheral I / O

The rear panel of Gaming i7 is slightly different from Taichi. The Gaming i7 offers one additional USB 3.0 port and one less 2.0 port each with a total of four and two. Everything else is the same, down to the Clear CMOS button. You still get two 3.1 Gb / s USB ports, one of which is Type-C, and one PS / 2 jack to connect to six other USB ports. The network has dual Intel Gigabit controllers and the same Intel 3160 Wi-Fi / Bluetooth combo card. Wi-Fi is still limited to 1x1 transmission, so only 433 Mb / s throughput.

Audio uses the same Realtek ALC1150 codec and TI for 600-ohm speakers and headsets. Instead of ASRock's Purity Sound 3 brand, Gaming i7 selects Creative Blow Cinema 3 Creative Labs support. Surprisingly, i7 games do not support DTS-Connect like Taichi, but this is not a big loss.

The internal peripheral header almost reflects Taichi. The Gaming i7 has two USB 3.0 headers along the front edge above the graphics slot, one more than the Taichi. Considering how thick and rigid the header cables are 3.0, so those so close together may not work well depending on your case. Two USB 2.0 headers run along the bottom edge of the board, and the HD audio header is tucked in the back corner.

The rest of the headers on Gaming i7 match Taichi, which is the serial port, TPM, and front panel headers on the lower edge. UEFI twin socketed chips with selector switch and numerical debugging display are also carried. Game i7 has two new bench buttons in the top right corner. Decorated with a large Fatal1ty logo, this looks like a shortcut key overclocking at first glance. Looking closer you can see "Power" and "Reset" in lower case.

The Gaming i7 is packed the same as Taichi and with the same box contents, which still feels low-end in some ways. Inside the box is a thin I / O shield, four SATA cables, and two fixed Wi-Fi antennas. The back plate has not been pursued with only sticker labels that include a gap between the USB ports. Like Taichi, it comes with three loud SLI bridges, one of which is the high bandwidth version. The Gaming i7 does come with a three month XSplit Broadcaster trial license, something that Taichi does not have. Manual instructions and disk drivers make up the rest.

Gaming i7 uses an familiar ASRock layout with full 1920x1080 resolution (most other brands are still 1024x768), albeit with Fatal1ty brand and color. EZ mode is enough for basic tasks such as boot disk commands, system time, XMP RAM, system fan profile, automatic CPU overclocking, board explorer, and firmware update. Most X99 users want an advanced mode where the rest of the settings lie. This includes the Favorites menu, five save profile slots, more precise fan controls, and of course overclocking.

Gaming i7 ignores the 35x Turbo Boost multiplier Intel recommends across cores and uses 40x when only two cores are active but 34x lower when three or more are in use. This can all be tailored to your liking. In addition to the default increase, the CPU option on Gaming i7 is almost the same as that of the lower Taichi.

One difference is that Gaming i7 allows you to adjust critical CPU temperature, different overclocking advantages over the 95 ° C hard threshold. This gives it back a small but significant temperature range for CPUs that push to absolute limits, especially at more room temperatures warm. This extra thermal range means 4.2 GHz straight at 1.31V perfectly stable without thermal freezing. The board is perfectly capable of reaching 4.25 GHz with slightly lower room temperature.

Motherboards calling themselves enthusiastic overclocking boards should have explicit control over BCLK, including rope ratios, and Gaming i7 does not disappoint. However, it still uses the same BCLK generator as Taichi, so expect overclocking to overclock drastically in this case is unrealistic. It can print a few notches higher than Taichi, reaching 102.8 MHz and 127.8 MHz using 1.0 and 1.25 ropes respectively. Not enough to catch a more flexible Gigabyte clock.

Taichi's biggest failure is the underwhelming memory performance: it's almost unstable on DDR4-3200 and only reaches DDR4-3146 on the XDR circuit DDR4-3200 CAS14 from the RAM test kits. Not only that, bandwidth is far behind the competition. Fortunately, Gaming i7 has no problem running XMP test bed and a little bit outside, but not much. Bumping BCLK to 100.4 MHz and using the XMP multiplier produces stable DDR4-3212, but as high as it gets to CAS14. Although this is a significant improvement over Taichi, Gaming i7 still carries Taichi's bad behavior with a large RAM-voltage match of 20mV.

Replacement Fatal1ty changed some things on the usual collection of ASRock utilities with Gaming i7. You get an F-Stream, which is basically a Fatal1ty A-Tuning brand with overclocking function and the same monitoring function from the last one. Also specific to Gaming i7 is the Sound Blaster Cinema 3 and Fatal1ty Mouse Port utilities, an app for setting up your mouse responses for focused games and adding some macro support. The rest are normal for ASRock boards: best friend bench tester, Restart to UEFI, AppCharger to enable slightly higher power shipping from USB ports, and APP Shop as the main utility download repository.