This is an introductory article to talk about some of the fundamental technologies which will be useful for students of CCNA and CCNP certification exam. Please note that this is not the most comprehensive guide but i hope it will immensely help not only the CCNA/CCNP candidates but network administrators, architects as well. Through this series I will cover interesting topics such as:


At the end you will be able to configure such a topology: 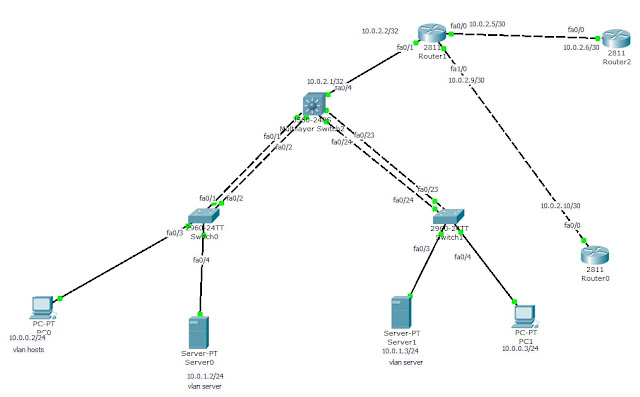 Before I write about inter vlan routing using a multilayer switch I would recommend you understand how it can be achieved using a router. Link to the webpage describing router on stick. If you a total newbie to VLANs, I highly suggest that you go through these blog posts:

If you look at the classic network device paradigm you will find a neat separation between "layers of OSI model". Each layer talks to the upper/lower layer by a protocol and they do not interfere with each other. Similarly each networking device had a specific purpose at a particular OSI model layer. A switch was called a Layer 2 device because it could only understand the Data link layer ie MAC addresses in TCP/IP. It  was not designed to read or process anything above layer 2. It did not know which IP address it was sending the packet to. Router on the other hand was a Layer 3 device. It could read and understand the IP address and make modifications to it. So if a network administrator of a relatively large network (having different Vlans and multiple switches) had to design a network topology it used to be pretty simple. Connect all the end devices to the switch (hub has been deprecated). Create a trunk link connecting to the 'upstream' device which used to be a router. The router would be configured to do an inter-Vlan routing. This would be the most simple topology that I can think of. Ofcourse it has many flaws, for example it does not have any redundancy or failover capabilties. Moreover there are chances that some links would get saturated. All about this in some future post! The main problem faced is that all the inter-Vlan routing is done by the router. Now a router was not built and optimized to do Layer 2 lookups and handle Vlans.

In comes a layer 3 switch. It not only has the ASICS to do hardware switching but also do routing lookups (for more details follow the link given below). This gives very fast inter vlan switching because the traffic know longer goes through the relatively slow physical connections. By doing so, a layer 3 switch effectively eliminates the need for a router for vlan switching and makes the connections much much faster. 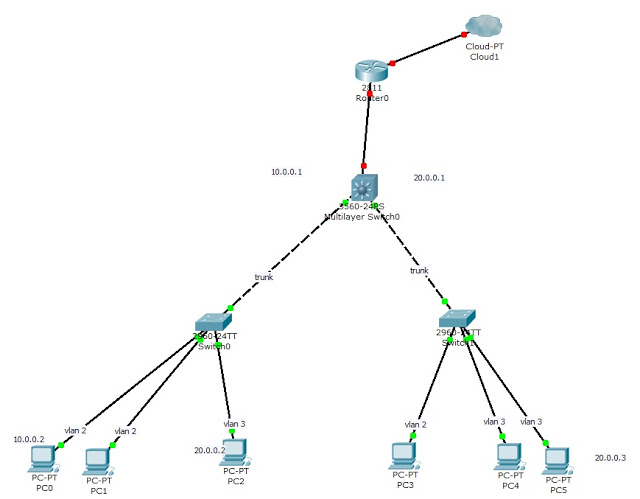 Note that by default a layer 3 switch DOES NOT do routing by default. You will have to configure it by running a simple command to make it populate routing table and entries. In practice you need to create either a SVI or a routed interface. An SVI (switched Virtual interface) is a virtual interface which belongs to a particular VLAN and can also have an IP address. A routed interface on the other hand is a physical interface to which an IP address is assigned. Do you notice the difference? An SVI interface has an Ip address but no physical interface attached to it. Creating a routed interface is just like making a switch behaving as a router. The switch will lose any information about vlans will not pass any Layer 2  traffic.

Intra-Vlan communication will work exactly the way it works in a layer 2 device. Now refer to the diagram. When intra-Vlan communication has to be done, eg PC 0 wants to talk to PC 4, it will realise that PC 4 does not belong to its subnet and therefore it will send a broadcast asking for the MAC address of its gateway which happens to be the switch. As soon as it receives the request, the switch will reply with MAC of the SVI. How the MAC is assigned to an SVI is out of scope of this article but you can read it here. PC 0 will then send the packet with MAC address of the SVI.

When the switch will receive the packet it will realise that the packet was meant for an SVI. It will then consult the routing table and realise that the ip address of the SVI belongs to a network which is in some VLAN. The following illustration should clear the concept.

The switch now knows that the packet is meant for a device in vlan 2. It will flood to all the ports of that vlan  an arp request for the destination IP address (remember the destination IP address does not change throughout the packet forwarding, only the mac address does at each hop). The rest is pretty straightforward. Now let us quickly fast move to implementation of these concepts.

NOTE: I will be using the above topology for configuration.


First try to ping the local gateway. If you are able to ping then move to step 2, otherwise check whether correct vlans are being passed to the multilayer switch. Check vlans by running
?
1
show vlans

Also check whether the host has been assigned an IP and it is connected to an access port.
Try to ping the other Vlans subnet. If you are not able to, it means the IP has not been assigned on the switch. First define a vlan by executing

vlans &ltvlan-id&gt
interface vlan &ltvlan id&gt
ip address &ltip-address&gt
If you are not able to ping the foreign machine, check the routing table by executing the show route command.