Whatsapp down or not working ? Live Status , Problems and Outages Friday date 03-11-2017

3 November 2017 : Problems at Whatsapp Connection Down

WhatsApp Messenger is a cross platform mobile messaging app for smart phones such as the iPhone, Android phones, Windows Mobile or Blackberry. Whatsapp allows users to send and recieve messages, photos, and other information and is considered an alternative to text messages or SMS.

Users took to other forms of social media to complain they couldn't use the service as a global problem emerged. 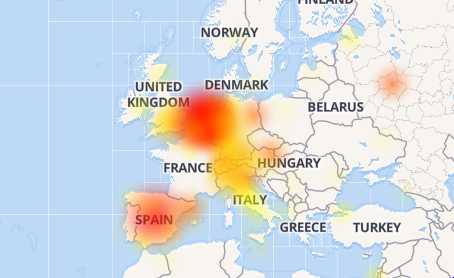 WhatsApp confirmed it was working on a solution to the problem but it was not known how long it will take to completely resolve it.

The app crashed at about 8am with more than 3,000 people across the country reporting it was down.

By 9am users across London and the south east said the service had returned - while others across the midlands and up north suggested it was still playing up until about 9.15am.

The outage appears to have hit much of Europe and some areas in Malaysia and Indonesia. 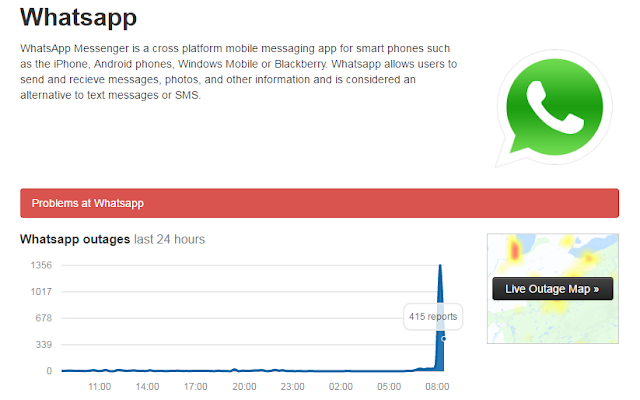 Reports of issues with the app came in from China, Saudi Arabia, India, the USA and Sri Lanka, and many users in countries outside of the UK were still reporting it down an hour later.

There was speculation the problem was caused by a hack, but WhatsApp is yet to comment.

Panicked users immediately began creating memes to poke fun at each other, as they grappled with the fact they were unable to use the app.

Paddy Power even joined in, as they tweeted a video of comedian Larry David fainting with the caption: "WhatsApp is down folks. This is not a drill."

Rebekah Vardy, Jamie Vardy's wife, is one of many who has complained about the lack of service on Twitter.

People have reported they cannot delete or edit their profile image or update their information, and in some cases privacy settings cannot be updated.

Some people suggested the launch of the iPhone X - today - crashed the messaging service.

The problems started at about 8am this morning, with 60 per cent of customers believed to be having trouble connecting.

Whatsappen, an unofficial Twitter account which reports on WhatsApp, tweeted at the time: "It's not known how long the issues will take. WhatsApp is aware and working on it."

WhatApp went down earlier this year in May, going offline for hours, before the problem was fixed.