While additional driver updates throughout the year add official support for new hardware, solve problems with the latest games, and slowly drive performance based on continuous optimization, this annual launch is commonly used by AMD to launch new functionality and improve existing features. .

Let's get started with Link, a mobile app for Android 5.0+ and iOS 10+ devices that facilitate performance monitoring, ReLive controls, and social interaction via a local Wi-Fi connection.

Configuring links is easy. Even if the process is not easily visible through the Radeon Settings software interface, the AMD Link app walks you through the Link server on your machine and adds the PC to the mobile app.

Once connected, you'll see five icons in the app dashboard, starting with the home buttons that go through some hot-linked marketing logos. We may be able to do without this screen at all; accidentally choose one of your emerging logos to the Web browser and to the appropriate AMD product pages.

To the right of the home icon, ReLive panel facilitates recording, streaming, instant replays, screenshots, and access to your media gallery. You must configure ReLive before using it all, but with the recording feature enabled you can start taking in-game or streaming and sent to social media without doing tabbing on your desktop. Since Links communicate over Wi-Fi, we want the option to play a recording clip via the Mobile ReLive Gallery before pushing it to Facebook or YouTube. 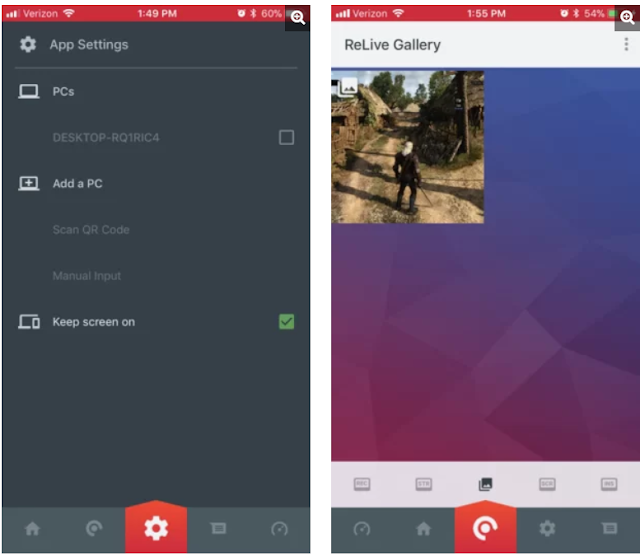 App Settings stay to the right of the ReLive Links panel. There you will find a connected PC (one mobile device can be associated with many PCs), an option to add a PC via QR code or manually, a URL that takes you to the AMD User Program Experience page, and an option called "Keep screen. "Sure, if you monitor performance, record, or control the flow, you want the Links to remain active. Be aware of the always-sucking screen down the battery power faster. If you disconnect from the network or close Links, this is where you'll go to reconnect. 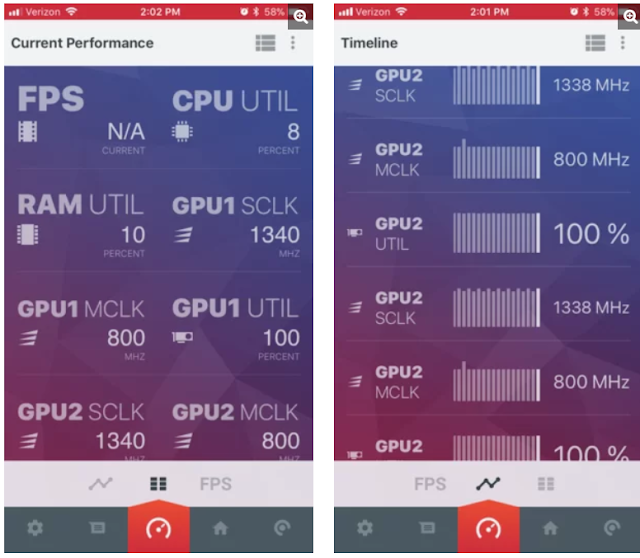 The last icon allows you to monitor performance through real-time snapshots of multiple metrics or timeline view. It appears that the attributes you want to see are reset each time Links out and restarts. Additionally, while the app detects more than one GPU, attempting to monitor two cards simultaneously generates two entries for a single card in the time panel. So, obviously there is a bug that needs to be done. However, this is a great starting point for what could turn out to be a very useful tool. The current timeline offers options for one and three minute history, and one or three second sampling intervals. We've asked AMD to expand this. And of course, the performance tab simply invokes controls like WattMan one day.

More practical, perhaps, is Radeon Overlay, which facilitates in-game access to ReLive, performance monitoring, Chill settings, Frame Target, FreeSync, and Color Target settings. By default, you can bring an overlay up by pressing Alt + R, even though it can be configured in the Radeon Settings Preferences menu. 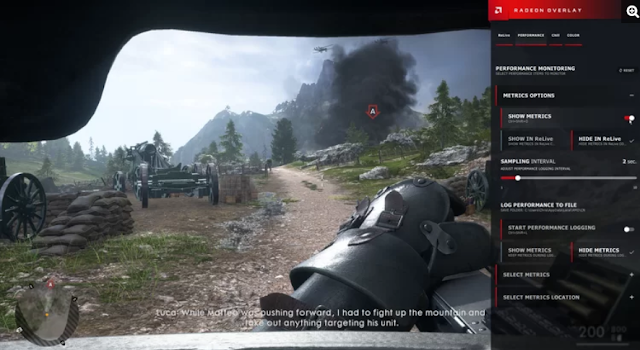 We've done a lot of performance monitoring using tools like AMD's own GPU-Z, AIDA64, and WattMan. But getting to the relevant data often requires logging and charting in Excel. By adding a monitor to Radeon Overlay, AMD makes it possible to display in-game performance metrics, as it will be generated. Currently, there are sampling intervals to choose between one and 10 seconds. We want to see the sub-second option in the future. 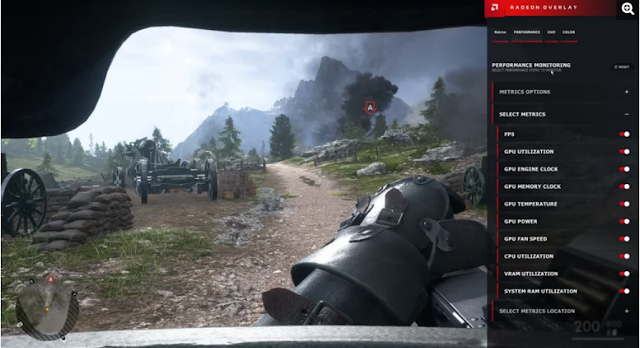 After the hassles of controlling ReLive through AMD Links, access through Radeon Overlay may have no impact. However, AMD lets you save your instant replay, record, record a specific region, stream, stream a specific region, and capture a screenshot without leaving your game.

Last year, we published the AMD Radeon Chill Benchmarking: Pumping Brakes on Wasted Power, illustrating how the technology works and its impact on performance / latency. By using Radeon Overlay, you can turn Chill on and off, then change the minimum and maximum. Changes made to Chill in this driver update may make technology more relevant to you if you have not already used it. More on that soon.

FreeSync can also be toggled on and off in-game through the new AMD overlay, if you have a compatible screen. In the past, you would turn on FreeSync globally, or turn it off for all games. With Radeon AMD Adrenaline Edition Software, variable refresh technology is available on a per-app basis.

The frame level target controls can be accessed through Overlay Radeon as well. No behavior change. However, placing the slider cap rate frame within range makes it easier to adjust the balance between performance and power. This driver update extends the FRTC functionality to include Vulkan based games.

The color settings are quite clear. AMD makes these adjustments on a per-view basis when multiple monitors are installed. Now this slider is also available in-game, it will be nice to see a separate display screen to compare display output before and after making adjustments.

In-game recording / streaming via AMD ReLive functionality is not new, of course. But AMD has done a number of improvements.

For starters, the company claimed a lower frame rate when recording from previous versions of ShadowLlay ReLive and Nvidia.

Next to the ReLive button, at the top of the Radeon ribbon of AMD Settings, is the Connect tab. Behind it, you can view, cut, and share captured videos, connect and manage accounts across eight different platforms, and check out AMD's resource center.

Other additions include separate audio tracks when recording, an in-game chat layer to monitor viewer reactions, support recording in Vulkan based games, borderless catcher support, the ability to record on multiple monitors via Eyefinity, and support chroma keys.


AMD introduced Enhanced Sync earlier this year, describing it as a v-sync form that seeks to incorporate optimized refresh display sync behavior, depending on the performance you see.

For example, when the game frame rate exceeds your refresh display, Enhanced Sync allows the game to run as fast as possible and only displays the most recently completed frame at each view interval. This prevents torn artifacts commonly seen with v-sync while maintaining a low input pause. At the other end of the spectrum, when the frame rate drops too low, Enhanced Sync disables v-sync. This allows tearing, but it helps overcome the stuttering you experience if performance jumps between 60, 30, or 15 FPS. With the Radeon Adrenaline Edition Software, Enhanced Sync is supported across all GCN-based GPUs, in Vulkan-based games, AMD mobile graphics processors, multi-GPU configurations, and Eyefinity arrangements.

We also mentioned that the Radeon Chill is accessible through a new stretch of AMD, and maybe that's an experiment to do if you have not already done so. That's because Chill no longer needs a whitelist. So if you're interested in reducing power consumption / heat / noise by avoiding unnecessary frame rates, it's easier than ever to at least give you the technology you're trying.

The Adrenaline Edition release further adds custom profiles to WattMan, making it possible to save, reload, and share configurations that might be optimized for games, mining, power saving, or noise.

It also allows unlimited multi-GPU support for GCN-based products in Windows 10 with DirectX 9, 10, and 11 games.

AMD is drawing attention to its compute mode too, although it already existed in the Radeon Software Crimson ReLive driver. At least on the desktop, this mostly affects cryptocurrency miners. Click the Gaming tab in Radeon Settings, navigate to Global Settings, find the GPU Workload toggle and switch between Graphics or Compute optimizations. Unfortunately, AMD won’t comment on the specific differences between its Graphics and Compute settings. We did see a big difference after switching over to compute mode on a mining machine with one Radeon RX 480 and one Radon RX 580: it jumped from a combined 39.2 MH/s reported rate to 49.5 MH/s.

Vega owners won't see the Graphics/Compute switch in AMD's driver. According to company representatives, all of the features that benefit compute workloads are already enabled by default in Vega's architecture, so the switch isn't necessary.

Along with new and improved features, AMD claims that the Radeon Software Adrenaline Edition driver also improves performance. The company selects five different games and compares the frame rate today with Crimson ReLive Edition 16.12.1 from December 2016. Sure, all the examples look at relatively large speeds. It's important, however, that four of the five games were measured to be launched in 2017, and could not be optimized in December last year. Plus, they're all DX11 titles.

We chose five of our own games, Ashes of the Singularity: Escalation, Middle-earth, Shadow of War, the Witcher 3, Tom Clancy's Ghost Recon Wildlands, and Tom Clancy's The Division. Two of them are DX12 games and the other is DX11. 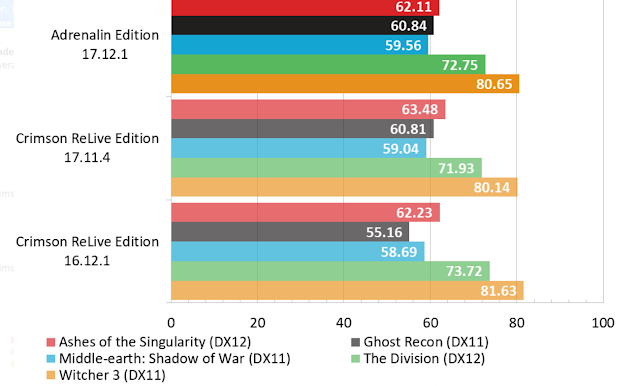 At our Radeon RX 470 at 1920x1080, we can mimic AMD's findings in Ghost Recon Wildlands. However, these improvements are not related to Radeon Software Adrenaline Edition: they've been baked in the latest release of 17.11.4, and are likely to be more related to optimization for games earlier this year when launched.

Otherwise, nothing else needs to be reported in front of the performance, at least in the game example we compare with the previous AMD driver release and the last major annual release. Expect this update to do more for functionality, while incremental versions that follow game launches eliminate unusual frame rates / frame time.

Ultimately, Radeon Software Adrenaline Edition discusses the growing cadres of gamers who broadcast social media to people's content to watch as audiences. It also adds convenience through Radeon Overlay, putting features like FreeSync, FRTC, and Chill that are within easy reach. By extending existing feature support to include more APIs, multi-GPU configurations, and multi-monitor arrays, AMD ensures its efforts reach more of its customers. You will not hear any complaints from us about it.