How to Analyze Threadripper Thermometer: Base Cooler Base Wins

Since its launch last year, AMD's Threadripper CPU has been the center of much discussion and debate. Due to its unique design - cooling requirements and physical and architectural efficiency are some of the main discussion topics. All Threadripper models have significant power and cooling requirements, with AMD recommends cooling the liquid directly from the bat. However, the actual thermal design specification (TDP) is not so high, suggesting that a good air-based coolant can easily overcome the thermal load. And here's where things get more complicated.

The Threadripper processor goes far beyond the typical CPU design in several ways, one of which is its relatively massive physical size. The surface area of ​​the CPU is much larger than previous consumer CPUs, including Intel's LGA 20xx socket. This considerable design choice is not because AMD can not physically shut down the CPU closer, but because the Threadripper size is the minimum size for which their technicians are counted effectively for both the mechanical strength of the pack and for sufficient heat dissipation. When the Threadripper is announced, almost all cooling manufacturers rush to provide an adapter for their product to be installed on a Threadripper processor. AMD itself includes an Asetek-based liquid cooling adapter in the Threadripper processor package. The user experience with such adapters, including our own capabilities, is less than ideal. So today we will see why AMD's thermal requirements are so exaggerated and show why the adapter is ineffective. 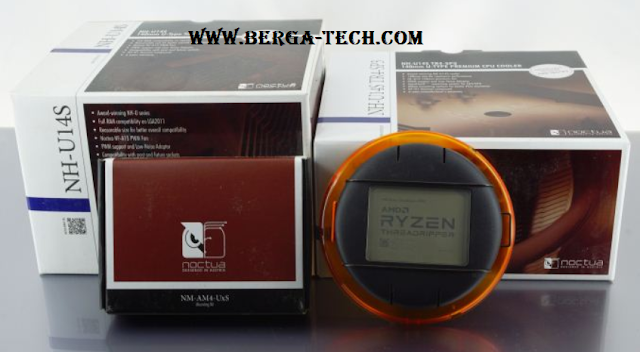 The most widely used cooler is designed with previous generation processors, and the contact surface is significantly smaller than the CPU surface area. Many manufacturers immediately offer adapters for their products to be mounted on the Threadripper processor (TR4 socket) and some mods of display / play mods that change the compatible AM4 cooler to fit. Using a typical socket and cooling adapter on a Threadripper processor does not work, but only partially covers the CPU surface area. 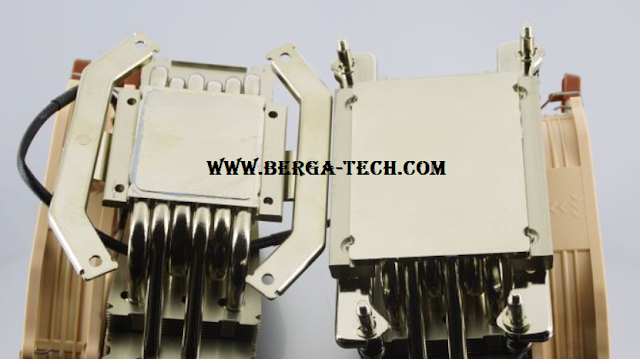 There is much debate as to whether an exact cooler but with a proper contact surface will have better thermal conductance. According to the basic thermal engineering theory, a cooler whose base covers more processor caps should perform better. On the following pages, we examine the theoretical aspects of this assumption and follow up on experimental case studies.

The image above shows a simplified CPU / Cooler setting. At the bottom layer we have our CPU die (s), the middle layer is the copper lid of the CPU and, finally, the top layer is the CPU cooler. With such an arrangement, we have three individual thermal resistors: R1) off CPU (heat conduction from dead CPU to CPU cover), R2) CPU cap (heat conduction from CPU cover to cooler), and R3) cold thermal cooling resistance. These three resistances summarize to make the absolute total thermal endurance of the CPU / Cooler settings. Simply and with the assumption of one-dimensional conduction, every absolute thermal resistance depends on three things: a) the length of the material in parallel with the heat flow (ie its thickness), b) the material's thermal conductivity, and c) the contact-center crosses.

The cool thermal resistance of the cooler obviously depends on the cooling itself (size, material, design, airflow, etc.). However, no matter how good the cooler is, the absolute thermal barrier of the entire setting can still be bad if there are too many other thermal barriers. For example, it is known among fans that several generations of previous Intel processors have poor thermal performance that can not be justified given their very low power requirements. That's because the CPU cap makes poor contact with the CPU's die (s), greatly decreasing the thermal flow between die and lid. Hardcore fans "subdue" their processors to fix this problem.

In the case of AMD Threadripper processor, this is the third part of the CPU / Cooler setting that causes concern, that is the cooler itself. As we mentioned earlier, one of the main factors affecting the thermal endurance of each section is the cross-sectional contact area. As an extreme example, even if we could design an ideal cooling body that has a zero thermal resistance to be placed on the copper contact plate, it would be ineffective if the contact plate is reduced to the pinhead size. 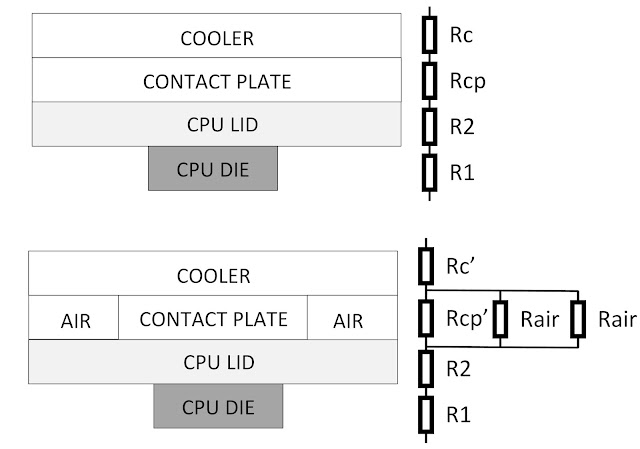 In the picture above, we divide the cooler into two parts for a fast and simple model. The first part is the contact plate and the second is the rest of the cooler. In this case, the cooling thermal resistance R3 is broken into two individual resistances (Rcp and Rc). If nothing changes from before, R3 equals Rcp + Rc. However, through simple mathematics and considering the heat conduction over the air can be neglected, it can be reduced that reducing the surface area of ​​contact plate plate will significantly increase its absolute thermal resistance and, in turn, the thermal barriers of the overall arrangement.

Consequently, assuming that we have the same CPU, lid and CPU cooling, a small refrigerant contact plate that does not make full contact with the cover significantly increases the thermal endurance of the overall setting. Furthermore, no matter how good the absolute thermal resistance of the cooling body is, even if we consider the hypothetical ideal coolant with no heat resistance at all, the rest of the resistance is still added to the amount that regulates the total thermal conductance of the arrangement. The high thermal resistance caused by small contact plates can not be easily resisted, which is why the absolute heat resistance of the cooler itself must be very high, that is why the AMD cooling recommendation is so over the top.

Our previous calculations represent real-world phenomena but are also based on our highly simplified assumption, assuming uniform heat transfer and one-dimensional conduction. A well-trained engineer easily realizes that real-world problems with cooling that only make some contact with the CPU cap are numerous and the price goes beyond simple daily thermal performance. For example, the absolute thermal barrier between the abandoned CPU die from the cooler contacts the lid and the cooling base more times. That's because two major geometric factors that affect thermal resistance, the length of the material in parallel with the heat flow and the cross-sectional area, are now very different. 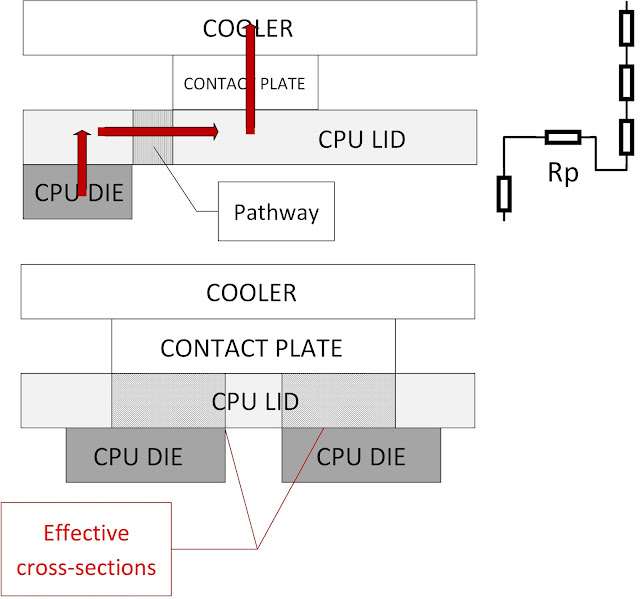 The above figures show two cases. At the bottom, the cooling contact plate is not large enough to cover the entire CPU cap, so part of the CPU is off the "effective" heat transfer cross section. This does not mean the rest of the residue does not receive cooling - the CPU cap will still absorb the energy from the whole die, but the heat flow stops being simple one dimension and the distribution will not be uniform, so it is higher. the temperature near the edge of the cap and, in extending, the outer portion of the die.

The top case is a more extreme example and assumes that the die will be left entirely outside the surface where the cooling contact plate will be located. In this case, there is no "effective" heat transfer interface at all and it is practically impossible to properly cool the device. Again, simplifying and solving problems as one dimension is possible by splitting the process into steps and taking one step at a time. We missed most of this step and headed straight for the important thing. As can be seen in the figure above, the thermal resistance of the "paths" created between the die and the contact plate is added to the total absolute thermal resistance of the arrangement. However, the cross-sectional area of ​​this "path" is very small because the lid thickness is relatively small. This results in massive resistance (Rp) which will be augmented by the number and can not be effectively resisted no matter how cool it is.

The two examples above show that any death that is partially closed or, much worse, not covered completely by the cooling contact surface, may be susceptible to overheating and reliability issues, even if the dead center of the processor is cooled properly, and regardless of the cooling capability .

To translate high-level concepts into real-world numbers, we need to see the actual Threadripper processor and cooler. To that end, Noctua volunteered to help us prove our theory by sending one of their most popular coolers, NH-U14S, along with an AM4 socket adapter. We had previously looked at NH-U14S, and this is one of the best performing coolers we've ever reviewed, so we know from experience that this cooling model is already in front of the pack in terms of cooling capabilities.

Regardless of the pedigree, Noctua is one of the few companies who advised against installing their old cooling designs on SP3 / TR4 processors. For users who want to move to the Threadripper platform, Noctua engineers have designed a special cooler TR4. For those who built the new TR4 system, Noctua developed NH-U14S TR4-SP3. However, installing the original NH-U14S on a Threadripper processor using the AM4 elbow socket is a frequently discussed and easy mod, as in all coolers compatible with AM4. Note that the AM4 Noctua adapter does not make the NH-UxS cooler compatible with TR4 from its box! 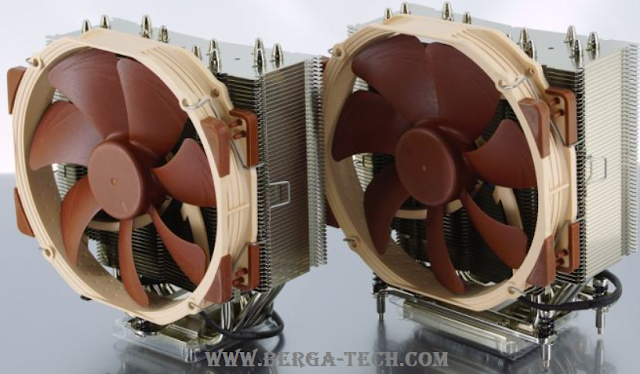 NH-U14S and NH-U14S TR4-SP3 initially look as though the cooler is the same. Two coolers share the same 52 mm depth and a 150 mm fin fin, as well as six same heat pipe. Each hot pipe extends to both sides of the coolant, forming twelve thermal energy transfer paths distributed evenly from the bottom of the cooler to the fin fin. Noctua nickel-plated copper copper pipes to prevent them from corrosion.

The difference between NH-U14S and NH-U14S TR4-SP3 is practically just a cooling base. Both coolers have a nickel-plated copper base but the NH-U14S TR4-SP3 contact area is much larger than the original design. Larger bases add a little weight and mass, but it will not be enough to make a significant difference in cooling performance if both can cover the processor surface. Thus, these two coolers are most appropriate for us to examine the importance of cooling that makes full contact with the processor cover.

Modeling the AM4 kit to fit the TR4 cooler requires only 10 mm (or just T-wide width and multiple screw) wide brackets, which can be found easily in hardware stores, 3D printed, or made with Dremel and a little patience. In our case, because we already have NH-U14S TR4-SP3 which braces according to the size of NH-U14S like gloves, we just release it from TR4-SP3 and use it to fix NH-U14S to TR4. electric socket. 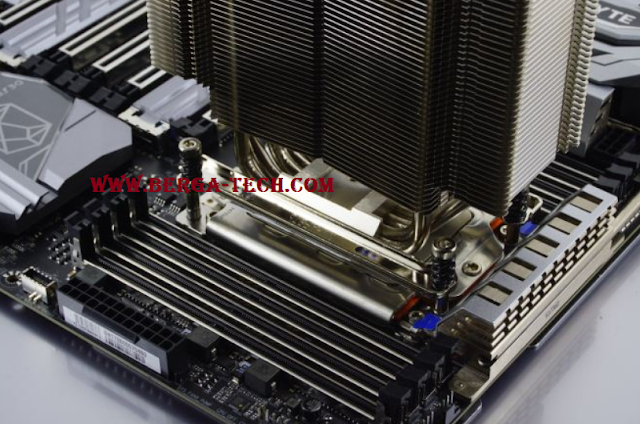 Our test system appears in the following table: 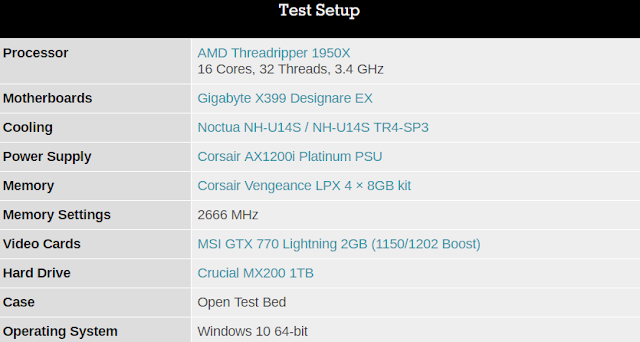 For both tests, we use Noctua NT-H1 thermal grease on the processor. For thermal oil to settle, the processor is loaded for at least one hour, allowed to rest for at least two hours, loaded again, then left to rest overnight. The results were recorded the next day. After the first test, the CPU is thoroughly cleaned and the process repeated for the second cooler.

By default, the motherboard tries to control the cooling fan speed depending on the temperature of the processor, creating a varied environment. When we try to show the difference between full and partial contacts for the exact same cooling setting, we need a stable environment, that fans have to run at the same speed. Therefore, we turned on the fan from an external power source, keeping the RPM stable during our tests.

Finally, we always monitor and record the temperature of Tdie. It is a more accurate representation of the actual CPU heat state, since the Threadripper nuclei (and some Ryzen) report their operating temperatures with large positive offsets (+ 27 ° C) for control purposes.