All About Smasung one UI. How To join samsung One UI BETA Program

The Korea Tech Giant Samsung is ready to launch a new UI that has been changed for its cellphone. Ealier at the Samsung Developer Conference along with the Folding Smartphone, a new UI was also announced. Samsung One UI will be based on the Android 9.0 Pie version. We all know how old Samsung UI like Touchwiz was sucked, it's a very bad UI. However, the Samsung budget device is trolled for lag, then the new UI experience is available for flagships but also some users don't like it. now, samsugn has finally announced a new UI that will be minimal. Materialist icon is seen in Preview, let's get some information about Samsung one UI and how to Join the Samsung One UI Beta Program.

About Samsung ONE UI. Changes :

Samsung One UI is rebranded type version of Experience UI. in the developer conference, samsung said this UI will be more simple, easy to used and more visually stunning. it is basically for big screen smartphones to use it easily.

One UI is the complere change interface. This Will show all of you importatn things on the bottom of the display. The rest of the display will be available for other display. This feature will handy when the phone is being used by one hand. so you can touch all the apps just by with your thumb no need of strecth!! 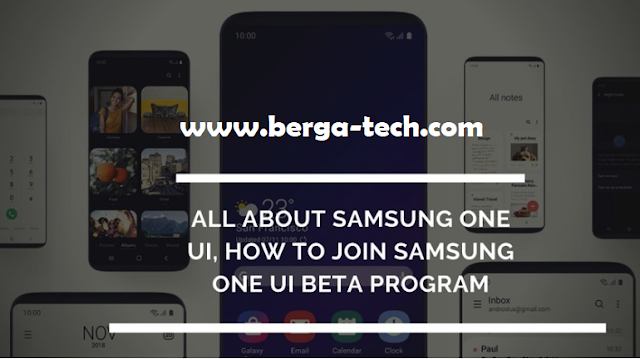 One UI Samsung came up with the materialistic icon. the black backgrounds whic look stunning on Amoled display. this UI is mainly focussed for the samsung flagship device. The dark screen materialistric design makes this ui much better.

What is BETA Program. Availability and Supported Devices :

we will update more features of samsung one UI. The BETA registration are open NOw. The first devices, samsung galaxy S9 plus, Note 9 will be getting the new UI update. The one UI will be available in January 2019, So if You want an early access you can register it here by following below steps

How to join Samsung One UI BETA Program :