Of the second generation AMD B450 and X470 motherboards that we have tested, the majority have been refreshed by pre-existing board models. Over time, vendors have the opportunity to make small changes and improvements to stay ahead of current technological advancements and inevitable design choices. MSI has tried checking both boxes with the new B450 Tomahawk equipped with an extended CPU heatsink, support for USB 3.1 Gen2 and RGB LEDs.

Review of MSI B450 Tomahawk

MSI B450 Tomahawk is the successor to the popular B350 Tomahawk and offers users a slightly better collection of features. It starts with a pair of USB 3.1 Gen2 ports, and an adjustable RGB LED light that is integrated into the board. B450 Tomahawk is a game-themed motherboard and comes from an MSI motherboard designed to offer affordable options to users with many features found on more expensive models, but with some differences to keep overall costs down. This includes good quality pairs and Realtek controllers which are cost effective on the audio and network side. 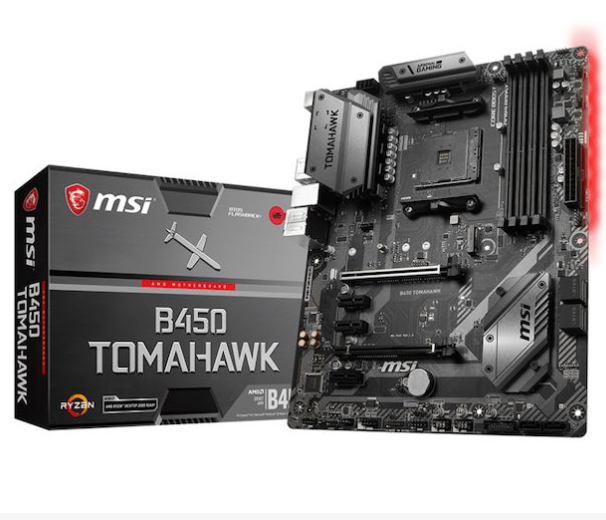 One of the most favorable aspects of performance to consider this model above the previous Tomahawk is the increase in official memory support. B450 Tomahawk now has DDR4-3466 support with a maximum capacity of up to 64 GB in four available memory slots. Storage capability is better than expected from a B450 motherboard, with a total of six SATA ports capable of supporting RAID 0, 1 and 10 arrays. Above this is a PCIe 3.0 x4 and SATA M.2 slot with a maximum up to M.2 22110 drives supported. The single M.2 slot does not share bandwidth with other PCIe slots but fills the slot with the drive but disables two of the six available SATA ports; specifically two right ports closest to the ATX 24-pin motherboard power supply.

On the back panel, MSI now includes a pair of USB 3.1 Gen2 ports, one Type-A and one Type-C. There are also two USB 3.1 Gen1 Type-A ports, and two USB 2.0 ports, with options to increase USB options by two and four more with internal headers. Video output from integrated graphics can be made via DVI-D port or HDMI 1.4 port. A PS / 2 mouse and keyboard port also exists. A single LAN port supported by the Realtek RTL8111H Gigabit network controller and six gold-plated 3.5 mm audio jacks take their direction from the center of the Realtek ALC892 HD audio codec. MSI has included the BIOS Flashback + button on the back panel for a quick and easy experience when updating board firmware. 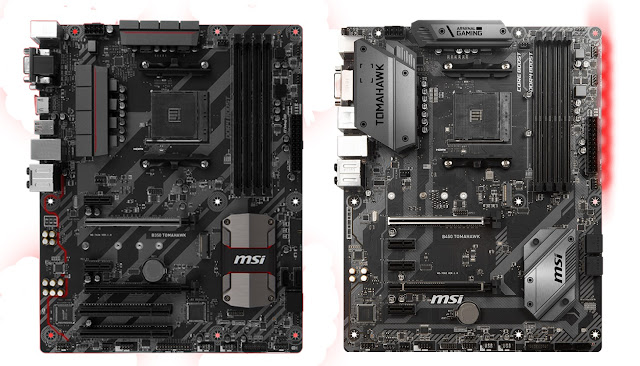 One of the biggest visual differences between the B350 and B450 Tomahawk is the heatsink and PCIe implementation. The B450 Tomahawk has a total of five PCIe slots with one full PCIe 3.0 x16 slot with a protective layer of the MSI Steel Armor, a full-length PCIe 2.0 x4 slot, and three PCIe 2.0 x1 slots that spend most of the space at the bottom of the board. The power delivery heatsink has also been improved with a heatsink that covers the MOSFET and extends further towards the rear IO. Newer Heatsinks have a cleaner and futuristic look, but with brighter gray colors. Other differences include the implementation of SATA ports.

When looking at the overall performance of B450 Tomahawk, the most positive points to highlight came in the power consumption test where the withdrawal of 2W power from the B450 chipset clearly played a big role. Even at the maximum load B450 Tomahawk even managed to do well with one of the lowest maximum power seen from the AM4 board so far. General performance across computing and the rest of the system-based tests are around the average for entry-level options, which are more acceptable for most systems. Unfortunately less impressive audio is a sign against the board.

However, overclocking performance is much better, with the delivery of solid 4 + 2 phase power around the commonly used Richtek RT8894A PWM controller. This seems to have paid dividends for MSI, because strict Vdroop controls are profitable. 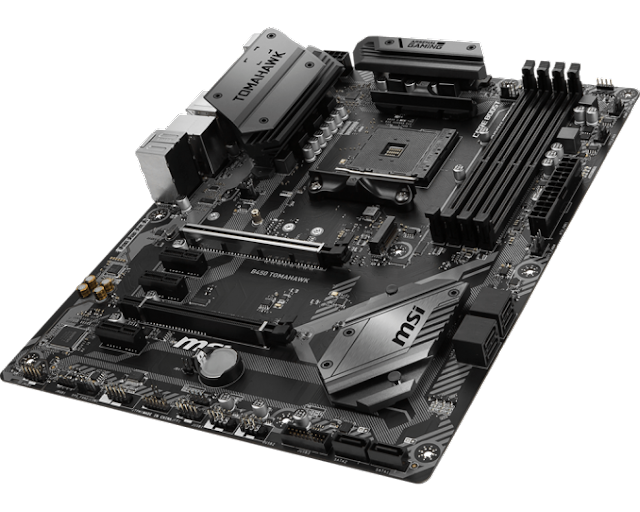 MSI B450 Tomahawk has an MSRP of $ 110 which is a $ 20 increase during the MSRP release of B350 Tomahawk. This fee can be attributed to the addition of RGB LEDs integrated into the board, and the inclusion of two USB 3.1 Gen2 ports. Tomahawk B450 is widely available and can have a sub-selling price of $ 100 on Newegg, which makes it far more competitive in the B450 motherboard market that is currently crowded.